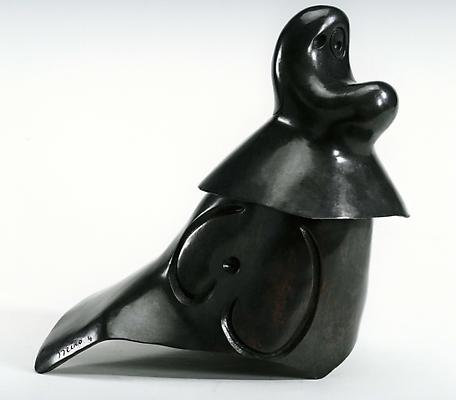 CATALAN FOLK ART
Joan Miró was born April 20, 1893 in Barcelona, and studied at the Barcelona School of Fine Arts. His work before 1920 shows wide-ranging influences, including the bright colors of the Fauves, the broken forms of Cubism, and the powerful, flat two-dimensionality of Catalan folk art and Romanesque church frescoes of his native Spain.

BRIGHTLY COLORED DREAMS
He went to Paris in 1920, where he met Picasso and fell under the influence of the surrealist poets and writers. In his mature style, Miró drew on memory, fantasy, and the irrational to create works of art that are visual metaphors of surrealist poetry, paintings that became known as 'peinture-poésie.' These dreamlike visions, with gestural abstract signs and symbols as well as written words, have a whimsical or humorous quality but also appeal to an art of the spirit. The forms in the paintings from this period, amorphous amoebic shapes termed biomorphic, are usually painted in a limited range of bright colors, primarily blue, red, yellow, green, and black.

MASTER OF MANY MEDIUMS
Unlike Picasso, Miró made frequent trips back to Spain. He stayed in Paris throughout the Spanish Civil War and returned to Spain during the years 1940-1948. The images in his work turned fierce, reflecting the turmoil of the civil war and the disintegration of Europe. Miró continued to work in the free and spontaneous manner established in the 1920's, and made many trips to France, New York, Japan and the rest of Europe. His late work includes many sculptures, mixed media paintings, drawings, prints and ceramics.