NEW YORK— "Artists for Haiti," a charity auction organized by actor Ben Stiller and art dealer David Zwirner and held at Christie's this evening raised a rousing $13,662,000 to benefit health and education initiatives for the earthquake-ravaged and desperately poor Caribbean country. Remarkably, the gloomy day on Wall Street and crushing gridlock from nonstop diplomatic activity at the United Nations didn't affect the giddy drumbeat of
bidding: all of the 27 lots offered sold, with four making record prices. The sale easily exceeded its $10 million pre-sale expectations.
All of the artworks were donated by the artists, many of whom made special works for sale. Christie's generously suspended its normal buyer's premium to add a bit of bargain-hunting atmosphere to the evening, while also contributing a bank of telephones to service absentee bidders, a rarity in charity auctions. Successful American bidders who paid above the high estimate or what would be considered fair market value by the IRS
were entitled to tax deductions on the difference.
The evening got off to a lofty start with Raymond Pettibon's large-scale work on paper of a giant wave from 2011 sold to New York dealer Philippe Segalot for $760,000 (est. $200,000-300,000). A second Pettibon wave painting, "No Title (But the Sand...)" (2011), fetched a record $820,000, selling to New York private dealer Guy Bennett (est. $300,000-500,000). Acquavella Galleries was the underbidder..
Zwirner artist Adel Abdessemed's printed steel wall relief, a kind of cheeky ode to Boetti, "Mappemonde-olive" (2011), made a record $350,000, even without the boost of a buyer's premium (est. $150,000-200,000). Segalot got back into the action and outbid a posse of contenders including Acquavella Gallery, Christophe van de Weghe, and Christie's expert Robert Manley to win Urs Fischer's "Tomorrow" (2011), a 96-by-72-inch milled aluminum panel and silkscreen image of a woman, for $920,000 (est. $300,000-400,000).
Dealer and charity event organizer David Zwirner dug into his wallet to snare gallery artist Francis Alys's ethereal oil on canvas, "Le juif errant" (2011) for $300,000 (est. $150,000-200,000), which was the second lot of the night. Both Zwirner and Ben Stiller were outgunned, however, by an anonymous telephone bidder for Luc Tuymans's stunning "Deal-No-Deal" (2011) for $1.15 million (est. $600,000-800,000).
Hollywood heavy Stiller, who has built schools in Haiti and introduced Zwirner to country's dire climate, bought Jeff Koons's silkscreen-on-stainless-steel "Bikini (Desert)" (2001) for $400,000 (est. $500,000-700,000). The "Zoolander" actor also acquired Martin Kippenberger's zany street lamp sculpture, "Kippenblinky" (1991), for
$200,000 (est. $100,000-150,000.)
Hollywood director, actor, and producer Justin Theroux — aka Jennifer Aniston's newish beau, and also her co-star in the upcoming "Wanderlust" — bought Glenn Ligon's "Stranger #44" (2011), a riveting composition of oil, charcoal, and graphite on canvas, for a record $450,000 (est. $150,000-200,000). Aniston, who was in the room, clapped enthusiastically after his winning bid.
Stiller also got into the act during a bidding contest between legendary tennis ace John McEnroe and Acquavella Gallery for Zhang Huan's "Chinese Flag No.1," an ash-on-canvas work from 2007. When McEnroe balked after bidding reached the $200,000 range, Stiller stood up and mimed an overhead smash with his white plastic bidding paddle, aiming it at McEnroe who sat stock still in the first row. Acquavella got it for $250,000. McEnroe didn't leave empty-handed, however, nabbing Elizabeth Peyton's colored pencil and pastel on paper portrait of "Jay-Z, Glastonbury" (2008) for $85,000 (est. $60,000-70,000.)
The highest price achieved in the evening went to Marlene Dumas's moving and unusually autobiographical portrait, "My mother before she became my mother" (2010), a painting she made shortly after her mother's death. It sold to Christie's world-wide contemporary head Brett Gorvy, taking bids from a determined collector on the telephone for $2 million (est. $600,000-800,000).
After the final lot, auctioneer Andrea Fiuczynski, the Los Angeles-based expert who squeezed the last drop out of many bidders, excitedly announced the evening tally. The standing-room-only salesroom burst into thunderous applause and Zwirner and Stiller stood up, pumped the air, and embraced one another. 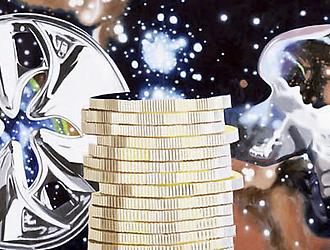