Twice in 10 years, Pablo Picasso's celebrated 1932 painting of his sleeping mistress, Marie-Thérèse Walter, made international headlines. Alas, the artist's breathtaking painterly skill and candid insight into human nature were not the cause.

First, on a chilly November night in Manhattan, "Le Rêve" -- "The Dream" -- became the most expensive work at a glamorous 1997 auction, which broke all records for a single-owner sale. Then, early on a hot Las Vegas evening in September 2006, a new owner poked a hole in the picture with an errant elbow, while showing the prize to unexpectedly shocked friends.

Now, for the first time since the elbow episode, "Le Rêve" is returning to public view. On Wednesday, New York's Acquavella Galleries presents "Picasso's Marie-Thérèse," a survey of works inspired by the middle-aged artist's nine-year affair with the pretty, young blond. Loans are coming from private collections and major museums, including the Museum of Modern Art and London's Tate.

The puncture left a several-inch tear across Marie-Thérèse's voluptuous left forearm. What happened in Vegas didn't stay there, as the calamity was reported in a New York Post gossip column, complete with factual errors, 10 days later. Soon, variations on the horrible tale appeared on the Internet, in print and on global TV and radio. The ballooning art market was the headline. In 1997, the painting had fetched $48.8 million at a landmark sale. In 2006, the damage occurred a day after its owner, casino and resort mogul Steve Wynn, had arranged to sell the painting privately -- an abruptly canceled $139-million deal, perhaps the most money ever for a painting.

No cynicism is needed to assume that one goal of the exhibition is to publicly demonstrate that repairs to "Le Rêve" have not had serious effect on its market value. William Acquavella has brokered many of Wynn's art acquisitions over the years, perhaps including this one. (Wynn bought the Picasso privately in 2001.) The Upper Eastside gallery is housed in the old Astor mansion on 79th Street, a stone's throw from the Metropolitan Museum. There, many Old Masters paintings would reveal, if they could be taken down off brocade walls and examined from the back, any number of damage-repairs made over centuries. Not all masterpieces are pristine.

In a penultimate chapter titled "Annus Mirabilis" -- year of miracles -- Richardson caustically writes, " 'The Dream' has become one of Picasso's most popular images; sadly, the record prices it fetched in 1997 and 2006 and its renown as a tourist attraction at a Las Vegas casino have left this painting so sullied that it is difficult to judge it on its merits."

Poppycock. Surely Wednesday's gilded uptown exhibition (through Nov. 29) is meant to begin the public process of un-sullying it. But the claim is sheerest nonsense, exposed by the silly snobbishness of the Vegas crack.

What makes the painting so exceptional is its exalted place in a hallowed tradition that includes Titian's "Venus of Urbino," Caravaggio's "Triumphant Cupid," Courbet's "Origin of the World" and many more. "Le Rêve" is an exquisite Modern sex painting.

On the fourth Sunday of 1932, Picasso painted Marie-Thérèse snoozing in a red-hot upholstered armchair. Her blouse is askew and her left breast exposed, while her head tilts to one side. Her hands rest suggestively in her lap.

Here is Richardson's description: "Picasso's transformation of the dreamer's thumbs and forefingers into a vaginal image, and her forehead into a penile one, confirms that sex is on her mind as well as between her legs."

Well, almost but not quite. Picasso was 50, Marie was 22 -- think Woody Allen and Scarlett Johansson. The painting depicts his dream, not just hers.

Picasso's most imaginative device in "Le Rêve" is this fusion of a sexual fata morgana with the radical pictorial device of Cubism, the innovation that had made him Modern art's first giant. Cubism shows an object from multiple sides simultaneously. In "Le Rêve," Marie-Thérèse has two faces -- one frontal, one in profile. It's as if she's animated, lolling her head.

The sharp profile is painted off-white, approximating the young blond's porcelain complexion. Directly above it is the pinkish-purple "penile" image that Richardson describes, resting lightly on her tranquil face. Picasso was a sadomasochist, and part of his seduction of young Marie -- they met when she was 17 and underage -- was to share his collection of erotica with her. One item was a drawing, now in Barcelona's Picasso Museum, showing a Catalan artist-friend receiving oral sex.

At the base of "Le Rêve's" engorged penis, a small crimson wedge does not just double but triple duty -- as Marie's caressing tongue, a sharp knife blade and a drop of blood. Oral sex melds with castration fear.

"Le Rêve" is a brilliant, justifiably famous masterpiece. Perhaps the greatest unremarked irony of its recent saga, however, is the relationship between its sexy subject and other news of the day.

The announcement that the coveted painting would be the centerpiece of the most lucrative single-owner art auction in history came in April 1997. Just a few weeks before, and unbeknownst to all, 25-year-old Monica Lewinsky had donned a navy blue dress and headed into work, delivering Pentagon documents to Bill Clinton's White House. Two months after the auction-hammer loudly fell on "Le Rêve," the Drudge Report announced that Newsweek editors had spiked a story by investigative reporter Michael Isikoff, exposing the Clinton-Lewinsky affair. 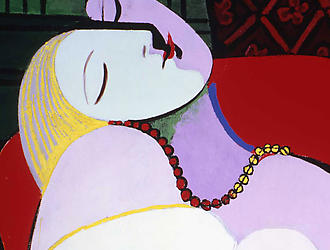