The Secret Life of Lucian Freud


Freud was known as a distant father to his over 12 children. But he did paint them nude as adults, including a controversial painting of one daughter after she had just had sex with someone, displayed in the Vienna show. How was his relationship with them?

David Dawson: When you’re sitting for a painting you have a very intimate time with Lucian because it’s just you and him for hours. They got to know him very well through that. From the very beginning, he was focused on painting and for that you need to be utterly selfish; he wasn’t making excuses, he was using selfishness as a virtue, almost, to make paintings.

Here’s a Freudian question: How was his relationship with his mother?

David Dawson: I remember his saying how he found it very strangling that his mother knew everything about him. He wanted to get away from that. They became closer after [his father’s death].

Bill Acquavella, Lucian’s New York dealer starting in 1993, made his work famous by putting it into the Metropolitan Museum of Art, the Hirshhorn, and others. How did they interact?

David Dawson: Lucian was at this point where he was making these huge paintings that needed to be seen in big museums and Bill was the kind of person who could open that up but also leave Lucian alone. They would talk on the phone about what paintings he was doing, but Bill would never, ever step Lucian’s creative flow. Bill would let Lucian do what he wanted, how he wanted, and when it was finished Bill would have it.

How did Mr. Acquavella manage Lucian’s gambling? He has a portrait of his bookies in the Vienna show.

David Dawson: Lucian gambled a huge amount when he was young, so he got rid of his debts by painting his bookies. When Bill started with Lucian, Lucian had an enormous gambling debt and Bill said ‘Ok, I’ll clear that up.’ It was something like £ 2.7 million [Roughly $4.4 million]. It was part of his creative cycle: he would gamble everything, lose everything, and then that would push him [to create more].

Lucian passed away at 88, but Eli–the whippet he gave you—is 14 and healthy. You and Eli are the subject of Lucian’s last, unfinished portrait in the Vienna show.

Lucian brought Eli for me as a puppy on Christmas Eve in 2000. From the very beginning, he always sat for Lucian and he knows how to sit perfectly and spend time in the studio. Whippets like a fast run and then luxury–lying around. Because Eli was bonded to me he’d always come sit next to me when I posed, and if he’d move I could just put him back in position. When Lucian was dying, the dog knew something slightly funny was up. 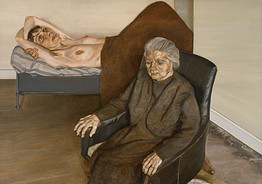